Encouraging stakeholders and team members for coordinated project management is the essence of success at the horizon. In contrast, it is surprising to know that much of the gaps handicapping project goals arise from missed opportunities and miscommunications. This is because many individuals don’t understand teamwork – so how to be a team player and what is the real value of collaboration.

Teamwork can be challenging and with definition and expectation out of it changing regularly, fostering great teams became ambitious.

Let start with a small story.

There was a washerman in this village and he got two donkeys – Donkey A and Donkey B. 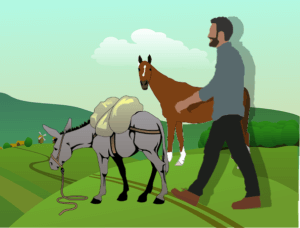 Donkey A always believed he was energetic and second to none, always tried to get washer man’s attention by outdoing other Donkey by lifting more loads and running faster. On the other hand, Donkey B was ordinary and always tried to lift as much as weight as Donkey A but failed. Also, it was never washer man’s favourite and in this course, he every so often tried to push Donkey B by putting pressure but it failed miserably. Failing to meet washer man’s expectations, as a result, Donkey B was punished repeatedly.

Tired of this, Donkey B decided to talk to Donkey A and said – friend, why to outdo each other? It’s only two of us, let’s work together and carry equal loads at a typical pace. After this, Donkey A became even more egoistic and started to carry even more load with increased pace. This eventually led to more pressure and punishment to Donkey B. Unable to stand washer man’s persistent tyranny, with great fatigue and weakness, Donkey B silently passed away.

Donkey A was beaming with uncontrolled joy as now it was only him. He was elated for proving his supremacy with his abilities and capabilities but forgot that now he also needs to carry other Donkeys loads. For the initial few days, Donkey A was able to carry both the loads but its pace reduced and its fatigue increased each passing day. But the washerman demanded more with greater expectations from his once-favourite. Washerman was unrelenting and punished the Donkey A even more but it could not satisfy any longer, it grew weak and could barely walk. Tired of his no-good Donkey, washerman killed his Donkey and went to buy a newer set.

Regardless of how superior you are, you cannot do it all alone.

Working together is all that factors in the end.

Teamwork is not something we got encouraged in our early life like in school curriculum or early childhood. So, how exactly we instil and incorporate team collaboration in our organizations is the contest. So here are a few ways we can construct teamwork culture.

With the Agile environment being more customer-centric, things tend to become more fast-paced and updated information needs to seep with the team quickly.

For this is to be streamlined, we have to focus and employ the right tools that are agreed upon and act like a commonplace for project interactions and iterations. Something like – Trello, Slack, Asana or anything similar or better.

Teamwork cannot be erected on temporary values for long term success – trust and transparency play a substantial role.  Trust factors in a sense of safety and safety bring forth comfort, innovation, creativity and importantly productivity. And for trust to inculcate within the team, transparency is the baseline of it.

Transparency pitches in openness and honesty by accepting disagreement. A very tested way to build trust is by team-building exercises or having conversations about family, hobbies or passions and getting to know each other personally.

Common goals because otherwise, it becomes a group of individuals with their own agenda. For better working strategy and focus, a common goal is important.

And with focus, not only motivation increases but task engagement and productivity goes up. And thus it not only shapes innovation but it brings people together, communicate and growth happens.

Celebrating success and recognizing each other’s contribution will build trust and respect among team members. Also, celebrating small wins will assist in motivation and positive intent for future challenges.

And these celebrations need not be elaborate, they just need to be a platform for interdepartmental gathering and discussing things outside to their work.

With trust and transparency comes an environment of openness that demands active listening. Listening requires to gather information to understand the message and situation before acting. The good part is, listening skill is easy to acquire with time – it’s about focus and understanding the different perspective.

“A Chain is as strong as its weakest link”

All it takes is one weak contributor to bring the entire team down. Weak contributor needless be negative, can be the silent participant who is not adding value but also he’s occupying a place which otherwise could bring proactiveness in the first place.

Participation is everything and without it achieving optimal productivity is tested. Demand or domination cripples participation, being sensitive we should encourage and respect each member’s opinion.  Remember, in the team, it is important to be an active participant to driver powerful positive results.

Teamwork spells a sense of unity and bedrock of all successful organizations globally. As workplace requirements and expectations becoming more and more challenging, teamwork seems the best strategy we can count on.

Each individual has unique talents and skills, and it is when we bring these together on a project, diversity and inclusion unfold and success becomes unfaltering.

So what do you think?

Do you believe that teamwork is important?

Also, do share your experience where teamwork has worked as a boon or a bane for you by sharing this article with your story across your social handles.

Benefits of data analytics for business

In today's digital age, the reliance on data for everything from day-to-day activities....
Read More >>

In this blog, we shall look at what data visualization is and what are some ....
Read More >>

Businesses of all sizes are finding it increasingly difficult to keep track of all of their business....
Read More >>

Data is omnipresent, and it exists in every industry and organization, at all levels....
Read More >>

This article discusses the top Big data trends, that businesses should watch, to strengthen and ....
Read More >>